Elvis! Most know him as the “hunk of burnin’ love” that “shook up” music, merging rockabilly with rhythm and blues, to become the King of Rock ‘N’ Roll.

While Elvis’ career is still the stuff of legend, it’s his personal impact on the world – his legacy – that makes him a role model to many of us today.

When my friend Kathleen and I were looking for a good vacation in 2010, we heard about a special offer at Graceland to celebrate what would have been Elvis’ 75th birthday. I have always loved Elvis, blues, and BBQ, so we packed up and headed for Memphis. It was a vacation for the books!

We first stopped by Tupelo, Mississippi, where we saw the little shotgun-style house that was Elvis’ childhood home. There, we learned much about his youth. I knew Elvis had a twin who died at birth (can you imagine two of them?!), but I didn’t realize how much his family struggled with poverty. 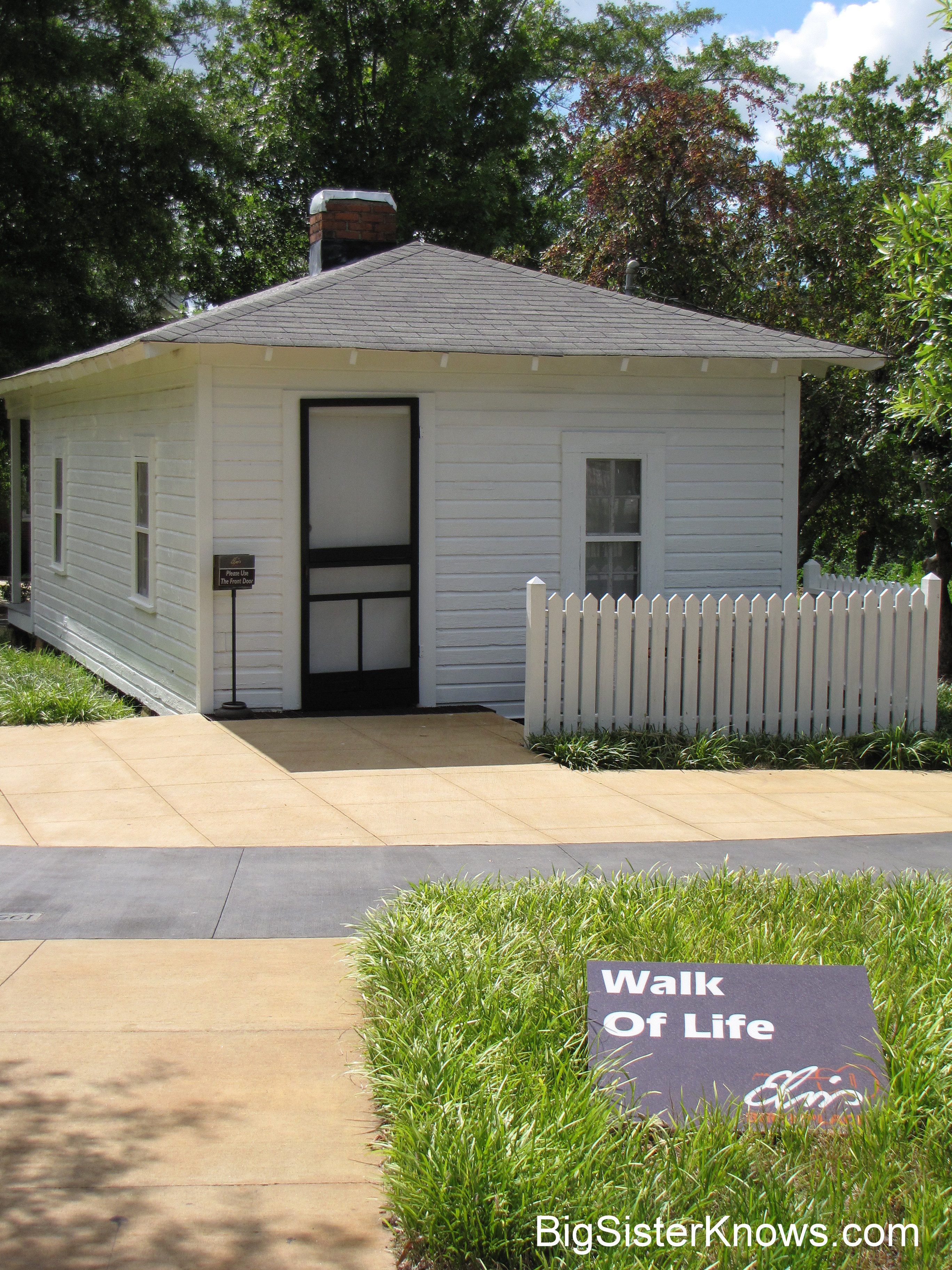 When Elvis was 13, he and his family moved to Memphis, Tennessee. He had always loved music and began to incorporate the blues and Negro spirituals from his youth into his rockabilly style. However, he was painfully shy, and it took him years to come out of his shell. It didn’t help that his music teachers flunked him, in part because they didn’t appreciate his unique style.

Kathleen and I followed Elvis’ trail up to Memphis, Tennessee. The first night, we stayed in the Heartbreak Hotel (yes, for real!). I’ll never forget sitting in the lounge, watching one of Elvis’ Las Vegas performances on the big screen. No one can deny that Elvis had the goods – the voice, the looks, and the ability to leave his audience in a fervor!

The next day, we toured Sun Studios and the Stax Museum and learned how Elvis finally got his start in the business. In 1953, Elvis tried multiple times to cut singles and join bands. Some said he couldn’t sing, while others were turned off by his shyness.

At 19 years old, at the end of another unproductive recording session (this time at Sun Studios), Elvis took out his guitar and started singing an old blues song while jumping around the recording room. The other musicians joined in, and the recording manager finally heard what he was looking for – a white guy who could sing the blues. That day, Elvis recorded his first single, “That’s All Right.” It became an instant sensation.

I had always figured that Elvis’ signature stage moves were calculated to thrill the audience. I was surprised to find out that it had begun on accident. In 1954, Elvis and his two band mates from the record single had their first live performance. Elvis naturally moved to the thumping rhythm of the music. These striking moves, combined with his nervous shaking, created quite an effect! When Elvis realized he was getting a reaction from the crowd, he was embarrassed because he thought they were laughing at him. (Can you imagine that?) He soon realized they were going bananas over him, and he learned how to exaggerate those movements for theatrical effect.

The next day, Kathleen and I took the final step in our pilgrimage: Graceland. This was the home Elvis lived in throughout his adult life. What might be called a modest upper-income home today was a full-scale mansion back then.

The first thing we saw when we walked in was the front parlor with a large white velvet couch, deep blue curtains, and two stained glass windows featuring designs of peacocks. Everything was lavish, from mirror and metal accents to rich fabrics. 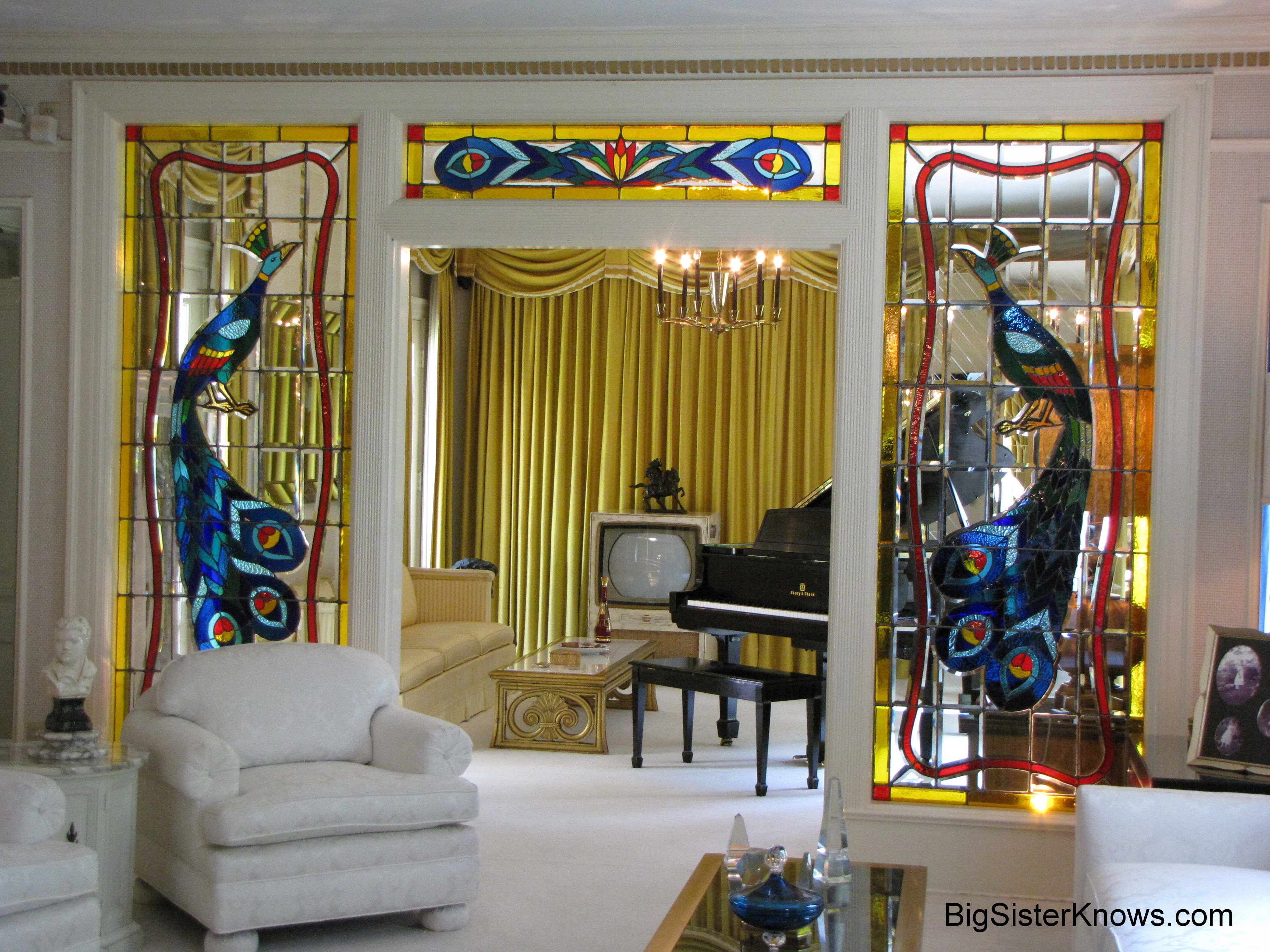 As we progressed into the house, we went through the dining room and kitchen, into the jungle room (which he designed for his daughter), down the mirrored staircase to the basement where he would listen to records and watch TV, and then to the tapestry-covered game room with a couple pool tables. Everything was designed with care, but the opulence of the parlor didn’t intrude into the rest of the mansion; instead, it became more of a home with fun, sentimental accents everywhere.

We turned down a wing of the mansion and were immediately overwhelmed. Every hallway, room, and alcove was filled to the ceiling with Elvis’ gold records, movie posters, and other memorabilia. A lifetime of awards and accolades were hung with care. 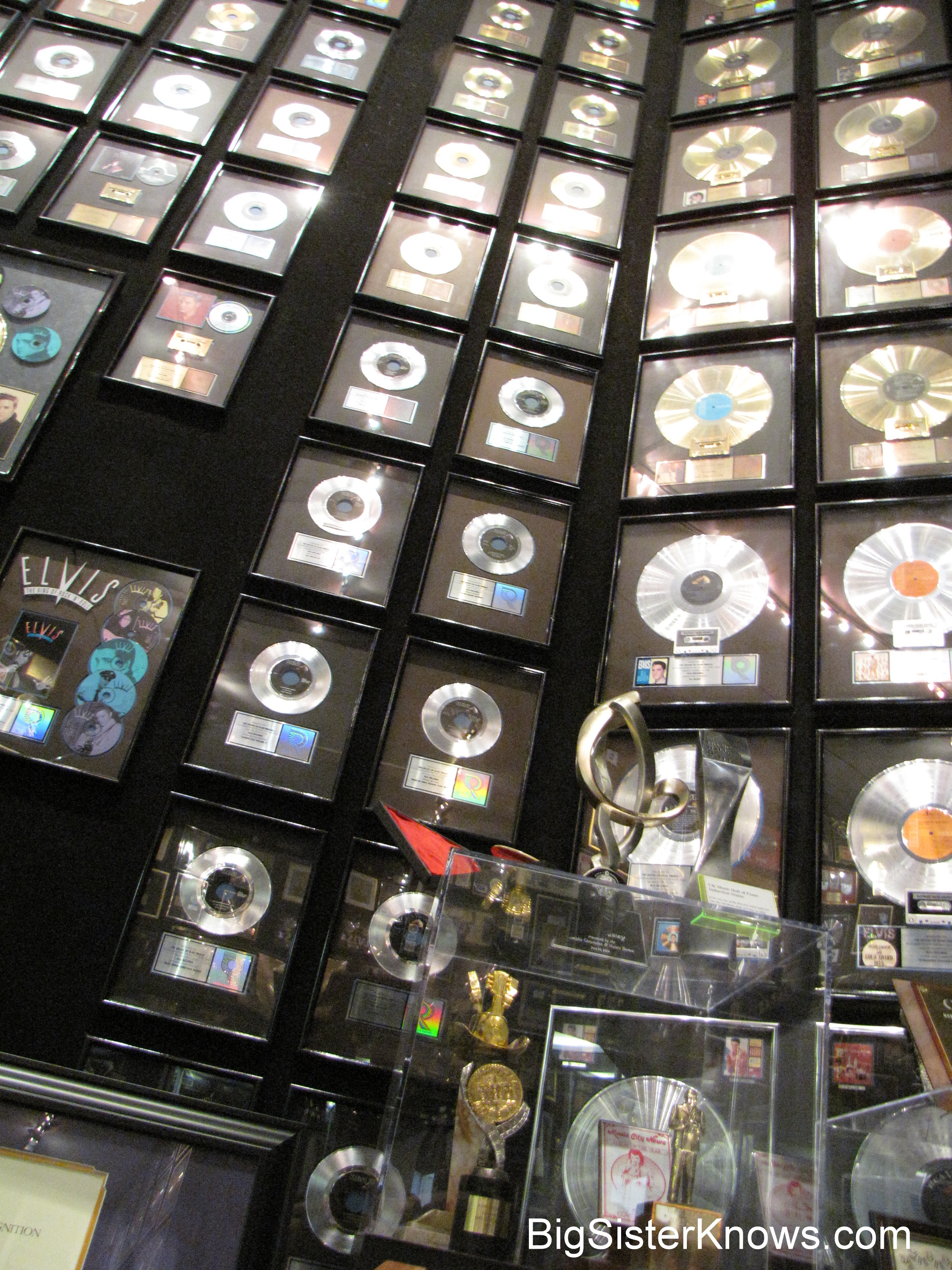 We also saw numerous stage costumes, including the white one with multi-colored stones we had seen Elvis wear earlier that week on the big screen at the Heartbreak Hotel. I had always wondered why he wore such distinctive costumes, and I found the answer. Elvis discovered karate when he served in the Army (which was after his career had taken off, by the way). He later incorporated karate moves into his act, such as punches, kicks, and splits. To ensure he wouldn’t tear his trousers, he had uniforms designed after karate “gis.” Instead of looking weird, somehow it all came together to make Elvis look striking, elegant, and larger-than-life, in a way that only he could pull off.

Over the years, Elvis combined his musical and performance talents to become what is arguably the biggest, most recognizable, most enduring musical icon of our time. He is still the best-selling solo artist in musical history, with estimated record sales of over 600 million units world-wide (a figure that increases every year). When all other artists fade into history, Elvis will still be the King of Rock ‘N’ Roll.

Elvis truly was a legend. But it’s his legacy that most amazes me. 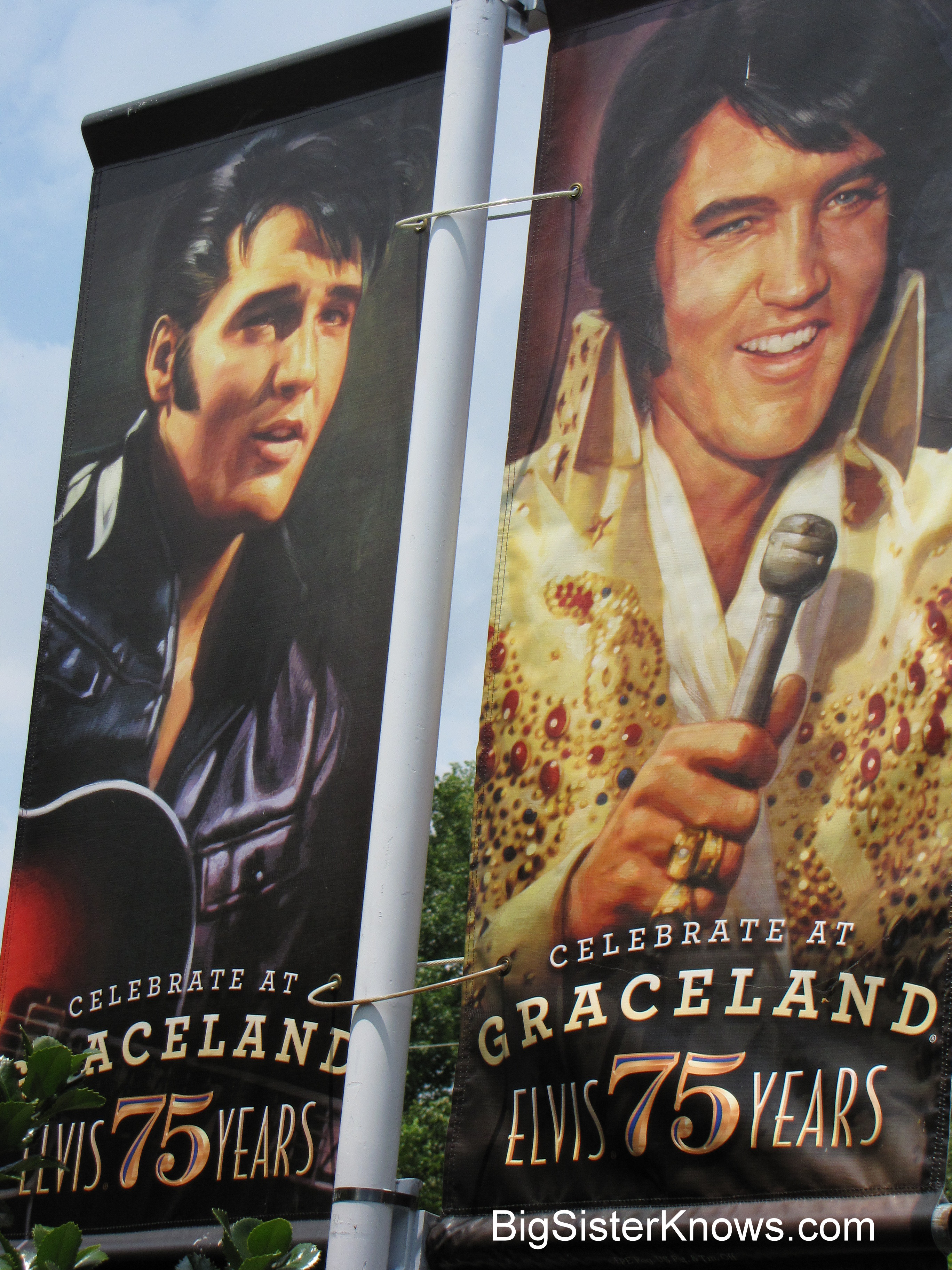 While watching his Las Vegas concert at the Heartbreak Hotel, I was amazed to see him switch from blues to gospel. This wasn’t a Christmas special; it was one of his most famous shows in Sin City! But there were no complaints from the audience! Can you imagine someone like Taylor Swift trying that today?

After the concert, we watched a short biography. It showed Elvis in the recording studio talking and playing with his band. The biographer noted that, no matter what Elvis was practicing, he usually finished his sessions with gospel music. It’s what he was raised on, and it’s what was in his heart.

The biographer also noted how he incorporated blues and Negro spirituals and rhythms into his music. He made typically “black music” acceptable to mainstream white audiences, and he included several black musicians in his group. It may seem small today, but mixing the music of the two groups helped to create a bridge between them.

You can’t talk about Elvis and not mention his wife Priscilla and their daughter Lisa Marie. Although Elvis and Priscilla would later divorce, he adored Lisa Marie, and she adored her father. Throughout the Graceland estate, there are family pictures, toys, and other sweet signs of family life.

In fact, when Elvis was young, he promised his mother that he would build her a house when he got rich. He was true to that promise and had a room made especially for her. I’ve never seen an episode of MTV Cribs where the rapper kept a room for his mom down the hall, but that’s exactly what Elvis did!

One of the biggest surprises for me at Graceland was a special room devoted to all of the thank-you cards and awards given to Elvis for his generosity. It was known back then that if you wrote to Elvis asking for money, he would give it to you. From schools to scouts, Elvis wrote plenty of checks (to a fault). We’ll never fully understand the impact those donations had throughout Memphis, Tupelo, and the surrounding areas.

Unfortunately, Elvis struggled with addiction of pain meds, and it was ultimately this that led to his untimely death in 1977 at the age of 42. People may point to this addiction, or his divorce, his gyrating moves on stage, his lack of money management, or any other fault that could be found with the man – for he was a man, after all, with all the insecurities and problems that come with the territory.

But I, like so many others, see the legacy he left behind – the family that loved him, the schools and communities that benefitted from his generosity, the country he served while in the Army, and the audiences who still enjoy his music and movies today.

Only Jesus was and is perfect, so He is our true Role Model. However, God also gave us each other to help, to lean on, and to learn from.

From time to time, I’ll highlight a person who exemplified faith, honor, integrity, or other godly characteristics in their lives. We can learn from these folks, even if they had faults in other areas. 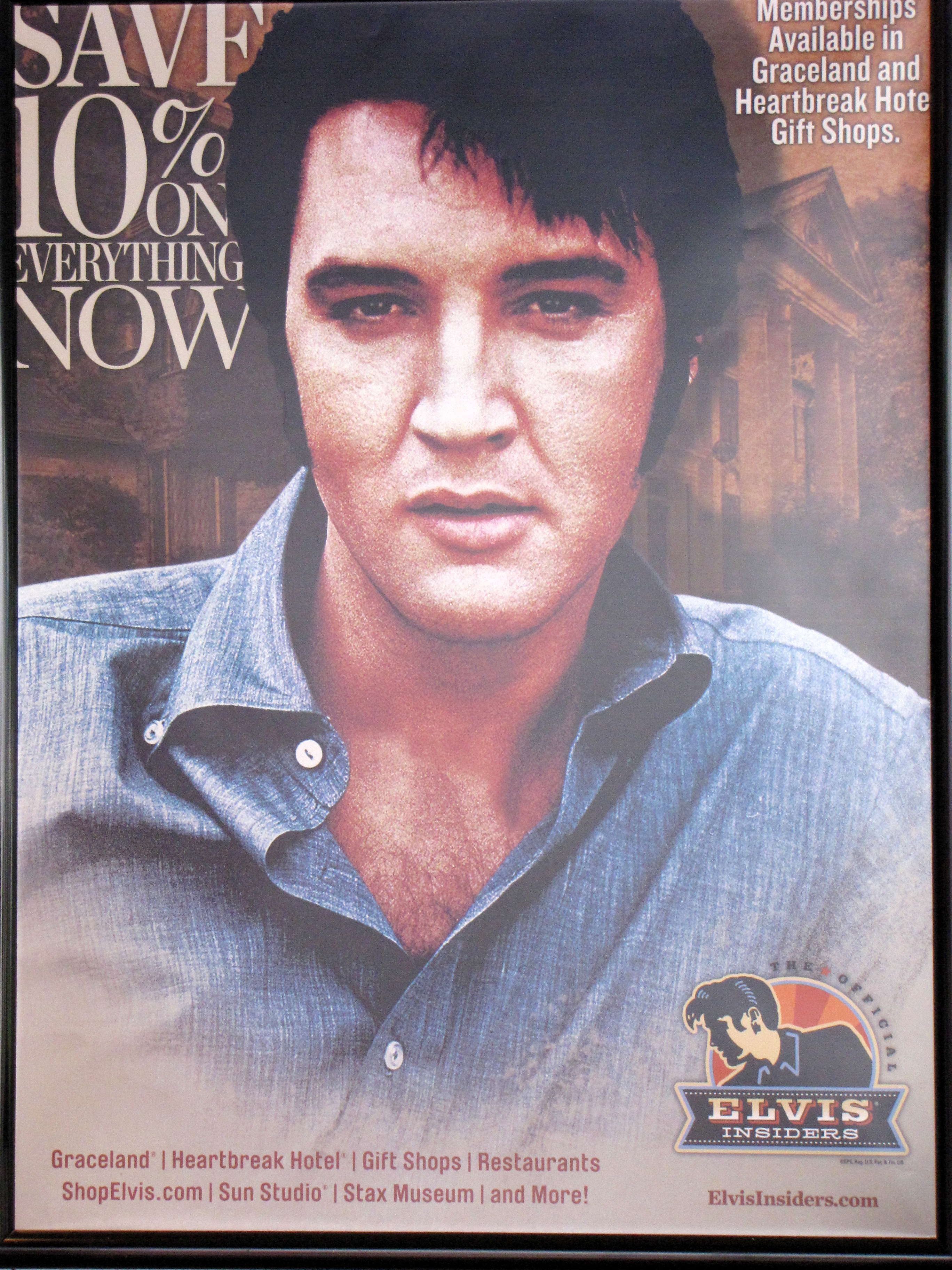 To me, Elvis showed compassion, generosity, grace, and integrity throughout his life, even as he struggled with addiction. The gospel stayed alive in his heart, as shown in his concerts and practice sessions. And his love for his family was self-evident. Even his rags-to-riches story is encouraging to those of us who hear that we’re not good enough, or we’ll never make it out of our small town circumstances.

This week, as we mark what would have been Elvis’ 80th birthday, I hope you find encouragement in his story. And I hope you realize the difference you make to those around you.

(With special thanks to Graceland media and Wikipedia.)