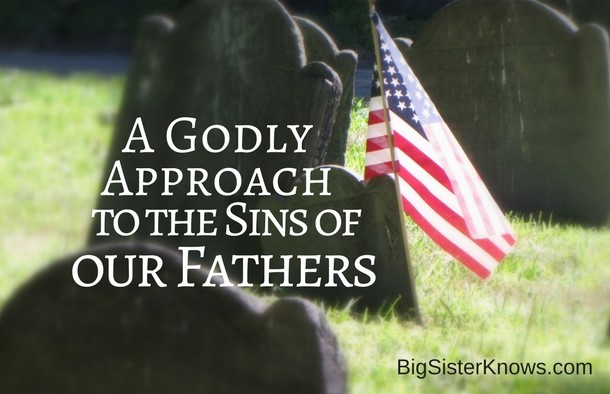 Thanks to OneChristianVoice for posting the following blog. Check out their site for news that affects Christians locally and around the world.

In the wake of the protests in Charlottesville, Virginia, virtually every city in the nation is trying to determine if their statues and monuments are politically correct (including my city of Tallahassee). For many, the memorials of our founding fathers are now epicenters of violence and hatred. It seems everyone now falls into one of two groups: those who want the statues to remain and those who want them removed.

As Christians, we should seek our answers and direction from the Bible. This alone—and not our personal bias or agenda—should be our standard.

The story of Noah in Genesis chapter 9 seems particularly relevant to us today.

Noah had just saved his family and a remnant of animals from the flood. He then planted a garden and a vineyard to begin cultivating a new food supply. However, the first batch of wine must have been stronger than he realized, because he “drank of the wine and became drunk, and uncovered himself inside his tent” (Genesis 9:21).

This appears to have been an accident on Noah’s part but, regardless of how it happened, Noah found himself in a compromising position. That’s when Noah’s son Ham “saw the nakedness of his father” (Genesis 9:22). Perhaps Ham had an ax to grind against his dad. Or maybe he thought that it was time for Noah to step aside so he could take the lead. Whatever his reasons, he decided not to cover his father discreetly. Instead, he left him naked and “told his two brothers outside” (Genesis 9:22). The Hebrew word for “told” is nagad, which means “to be conspicuous.” Ham didn’t whisper a concern for his father; he declared his father’s mistake out loud so he and his brothers could revel in their father’s shame.

Ham’s brothers, Shem and Japheth, didn’t take the bait. They didn’t broadcast the situation to their wives and children. They didn’t make jokes about “dear ol’ dad” or post incriminating pictures on Facebook. No, they simply took a garment, like a cloak or wrap, and laid it over their father. In fact, they didn’t even look at him, but walked backwards into the tent so they could cover his nakedness while maintaining his dignity. (See Genesis 9:23.)

What is the right response, then, when we don’t approve of the actions of our forefathers? When we wish there had been more equality, more grace, more sympathy from past leaders? When we’re appalled, ashamed, and embarrassed of their sinful acts?

Usually, our response is to be like Ham. We yell to others to “Come and see!” We point fingers and sling accusations and curses. We want others to bear witness: “See how bad he was? Don’t be like him!” We think this is our duty, and we call our hatred righteous indignation.

The truth, though, is that we are all like Noah. We think that our sins and shame are hidden in our own tents, that no one will know our mistakes or see the darkness of our hearts. But we are exposed before God, and our own children will judge us.

We all hope that future generations will treat us like Shem and Japheth, that they will look upon us with respect and dignity, regardless of our mistakes. That they will try to see our situation as it is now, and not in the clearer vision of hindsight. Should we not care for our own forefathers in the same manner?

Remember, Noah was the only person on the face of the planet who “found favor in the eyes of the Lord,” which is why God chose him and his family to repopulate the earth after the flood. We know that Noah was “a righteous man, blameless in his time; Noah walked with God” (Genesis 6:8-9). This was a man unequal in his day, and yet he made a mistake.

Noah’s son Ham treated him with callousness, while his sons Shem and Japheth were respectful. Nevertheless, Noah’s mistake was not covered up when his sons covered his nakedness. No, his mistake is now captured in every printed Bible for all the world to see!

That’s how history works. A man can have a noble heart and do a thousand good deeds, but we may seize upon his faults, skewing our perception of him. Or perhaps the history books correctly characterize the sinful acts of a person, but they cannot tell us the motives of his heart.

When we talk about history, we forget that it was forged by men and women…people just like us. And the Bible says that none of us is without sin. (See Romans 3:10.) None of us can boast that we have lived a life of perfect righteousness…not even Noah, from whom the whole world was saved. Instead, we must boast in Jesus, the Righteous One who saved us from our sins. (See Acts 3:14.)

Our past is more than statues and history books. We are constantly affected by the actions of our parents and our ancestors, and we must decide how to react: whether to protest, support, vote, volunteer, expose, or blow the whistle.

It is my prayer that we will approach our history—and the sins of our fathers—like Shem and Japheth approached Noah. To do so, we must set aside our arrogance and seek the truth in humility, for that is the beginning of wisdom. And as we reveal the truth, we must avoid reveling in its sins, for that will only bring dishonor upon ourselves. (See Proverbs 11:2.)

We must also cover the sins of the past, not with a cloak of darkness or with lies, but with mercy and forgiveness. Mercy couldn’t hide Noah’s mistake, and it won’t make the sins of the past go away. It will, however, remove the sting of sin and enable us to forgive our forefathers.

And isn’t that what we all want: a future that is marked with love, truth, mercy, and forgiveness? A future that we can be proud of? If so, then it is up to us to show our children the way.

“For in the way you judge, you will be judged; and by your standard of measure, it will be measured to you” (Matthew 7:2, Jesus speaking).

I’d love to hear your thoughts on this! Please leave a comment below. Thank you!