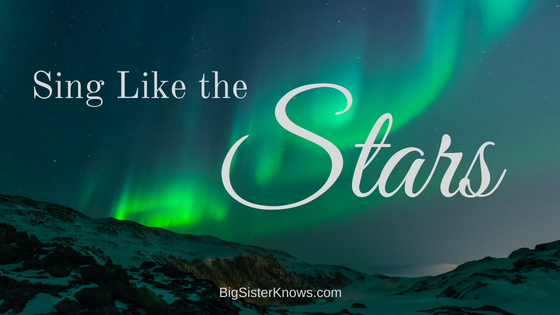 This year, Robby’s grandmother turned 97 years old. I really wanted to give her a meaningful gift to help celebrate the big occasion, but what do you get someone who’s lived for nearly a century? All the usual gifts were either too techy or duplicates of what she already had (and how many blankets can one woman really use?).

That’s when I remembered that her first name, Esther, means “star”—and I knew instantly what to give her!

Several years ago, David Hull, my professor at the Bible college, played some CDs for us before class. Several sounded modern, with unique beats and rhythms. Others sounded like choirs or angels singing. Then David told us what we were listening to: space!

He was playing Symphonies of the Planets, a compilation of audio recordings from NASA’s Voyagers I and II. As these automated space probes made their journeys through our solar system, they recorded vibrations around Jupiter, Saturn, and Uranus. The recordings included:

These recordings were later translated into sound waves that were included in the Symphonies of the Planets. Although the CDs don’t contain the full raw data, they are compilations of what the Voyagers recorded, arranged in a musical form. Unfortunately, these CDs are no longer being produced, but you can listen to them on YouTube.

And that’s what we did for Grandma King’s birthday. I found a YouTube channel on my phone and turned the sound up, and Grandma King heard something she had never heard before: the sound of the planets singing.

The word for “star” in the Old Testament is kokab (Strong’s 3556). It gives the sense of something round, blazing, and shining. Since planets reflect the sun’s light and can often be seen in the night sky, they are usually included in biblical references to “stars.”

And what exactly what does the Bible say about stars?

Isn’t it amazing to think that celestial bodies worship God?

We often think that worship is something we do in church before the pastor delivers his weekly sermon. But the praise music of stars reminds us that worship is more innate than that.

If we love God and live for Him, everything we do can be considered worship, from cooking dinner to doing the dishes, and from working in an office to raising the kids. Simply doing what we’re supposed to be doing—being obedient to God—is worship.

As human beings, we have the capacity to decide whether to live for God or not. For that reason, our worship is considered the sweetest and most precious out of all of God’s creation…even the celestial bodies! This week, I encourage you to remember the value of daily worship, of living each day for God’s glory. Then your life will sing like the stars!

[Click to Tweet: Worship isn’t just for Sunday mornings. As believers, being obedient to God in our daily lives is worship.]

I wrote the following poem many years ago. Though I don’t consider myself a poet, it seemed fitting to share this with you here. May it bless you this week!

How can one make the sun more luminous
Or lend beauty to a plucked wildflower?
Can one add joy to a child’s laughter
Or make the lion more regal?

No, we cannot add to a mountain’s breadth
Or to the calm in the eye of the storm.
The earth is already adorned;
Its daedal posts hold fast.

What good are we, then,
The not-so-innocent bystanders?
Indeed, we find ourselves interlopers,
Bombarding onto an open set.

Still, He says we are formed in His image,
But not to add to His glory.
Our part is to continue the scene—His story—
As merely mirrors, reflecting His beauty and grace.