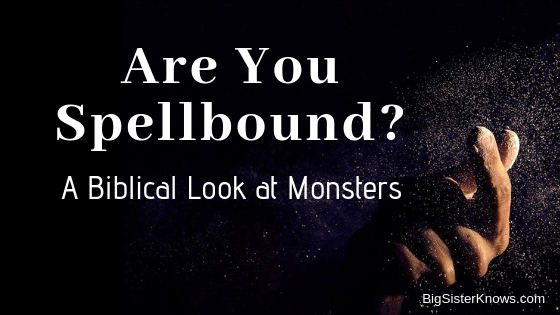 In last week’s post, I covered the topic of witchcraft from a biblical standpoint. Since Halloween is fast approaching, I thought it would be interesting to address the related topic of “monsters,” such as vampires, werewolves, and zombies.

Many of these monsters are now legendary, transcending time and cultures. For instance, zombies seem to have a permanent place in mythology. Where they were once seen as the evil undead, now they’re depicted as vicious victims of disease that wreak havoc on the rest of the world.

As a sci-fi fan myself, I can appreciate stories that explore the question, “What if…?” And I love silly stories in which people have to band together to fight an animal that’s too big and vicious for it’s own good (Jaws anyone?). But, as Christians, are there some monsters that we should avoid, at least in books and movies?

As in all things, we should look to the Bible for our answer.

But the Bible doesn’t really talk about vampires, werewolves, or zombies. Does that mean it doesn’t hold the answer? Not at all! We just have to take a different approach.

A few years ago, I studied the concept of jealousy in the Bible. Interestingly, one of God’s names is Jealous (see Exodus 34:13-15). This means that God’s desire is for His people to worship Him and Him alone. Like a husband who wants his wife to have eyes only for him, God doesn’t want us to follow after other gods (aka the Enemy).

“Then God spoke all these words, saying, ‘I am the LORD your God, who brought you out of the land of Egypt, out of the house of slavery. You shall have no other gods before Me. You shall not make for yourself an idol, or any likeness of what is in heaven above or on the earth beneath or in the water under the earth. You shall not worship them or serve them; for I, the LORD your God, am a jealous God, visiting the iniquity of the fathers on the children, on the third and the fourth generations of those who hate Me, but showing lovingkindness to thousands, to those who love Me and keep My commandments’” (Exodus 20:1-6 NAS).

This concept of jealousy also implies that God will be consistent in His relationship with us. After all, we can’t knowingly, purposefully serve God if He were to constantly change his appearance or the way He interacts with us. God wants us to know Him as God, just as a husband wants to be known as a husband.

On the other hand, the Enemy’s approach to us is quite different. You see, the Enemy has no right to a relationship with us, no right to be jealous for our attention. He was an interloper in the Garden of Eden, and he’s still an interloper today. Which means he’ll take what he can get, using his horde of demons to take on any form that accomplishes his purpose.

“They sacrificed to demons who were not God, to gods whom they have not known, new gods who came lately, whom your fathers did not dread” (Deuteronomy 32:17-21 NAS).

Throughout the Bible, when people worshiped idols like Baal, sacrificed their own children, and participated in witchcraft in its various forms, they were actually worshiping the Enemy. That’s because all people have two choices: we can serve God or the Enemy. There’s no in-between.

“Do not be bound together with unbelievers; for what partnership have righteousness and lawlessness, or what fellowship has light with darkness? Or what harmony has Christ with Belial, or what has a believer in common with an unbeliever? Or what agreement has the temple of God with idols? For we are the temple of the living God…” (2 Corinthians 6:14-16a NAS).

The Enemy’s Purpose and Methods

Whereas God wants us to worship Him and Him alone, the Enemy doesn’t really care if we worship him—he just wants to draw us away from the one true God. Our enemy is the ultimate stumbling block.

What does all this have to do with monsters? Let me illustrate by sharing a true story.

In 2009, someone posted an image of a character called Slender Man on the internet. The image, which struck a nerve among viewers, went viral. In May 2014, two 12-year-old girls stabbed a classmate 19 times and left her for dead. Thankfully, the victim survived after crawling to a nearby bike path. When police asked for a motive, the perpetrators claimed their actions were in service to the Slender Man. The girls now state they weren’t in their right minds when they committed the attack.

Whether the Enemy inspired the image and mythology of Slender Man, or whether he jumped on the idea afterward, who knows? However, it is clear that he used it as an opportunity to create a “new god,” and to seduce two young girls into a heinous crime, an actual modern-day sacrifice to an idol.

This horrifying event shows how the Enemy can use anything to create idols in our lives and then use those idols to his own ends.

How Do We Respond?

Most of us wouldn’t be affected by an ugly image online, a silly movie about zombies, or a book about vampires, but we should still be on guard, making sure we focus on things that are good, honorable, right, pure, and lovely (see Philippians 4:8).

While we’re at it, we should also beware of the more prevalent idols of money, consumerism, greed, gluttony, selfishness, ambition, etc. These may not look like monsters, but they can certainly turn us into one if we’re not careful.

A Note for Parents

Don’t think for a second that your kids are off limits! In fact, the Enemy targets children so he can plant seeds of doubt and fear or encourage acts of witchcraft. Too often, children see or hear the Enemy in various forms, only for their parents to dismiss their claims as overactive imaginations. Pray for the children in your family and ask for godly wisdom if they make such claims.

Remember, the Enemy has no place in your life! Only the God who created you and loves you has any right to be jealous for your time and devotion. So spend that time with God and banish the monsters from your life.

“Lord, please forgive me if I have entertained the Enemy in any form. Give me discernment so I can avoid him and focus on You. Protect my family from any schemes of the Enemy and keep us in your care. Thank you for being a true God who is the same yesterday, today, and forever. In Jesus’ name, Amen.”

[Click to Tweet: The Enemy has no place in your life! Only the God who created you and loves you has any right to be jealous for your time and devotion. So spend that time with God and banish the monsters from your life.]