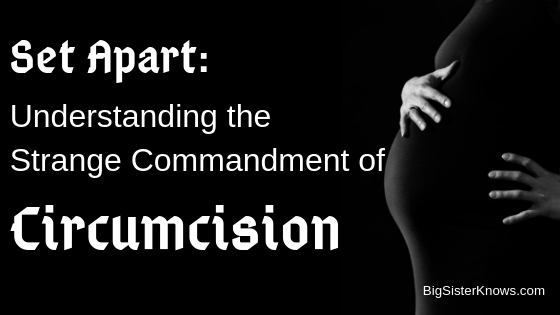 There are a lot of unusual commandments in the Bible, but none is stranger than that of circumcision. As new parents, Robby and I had to decide whether or not to circumcise our little boy. After digging into God’s Word a bit, this strange practice now makes a lot more sense.

In talking with other parents, though, I realized that many make this decision based on cultural norms or medical studies, but few understand the biblical basis for circumcision. Here it is in a nutshell.

First, what is circumcision?

The penis has extra skin on the tip called foreskin that retracts as the child develops. Circumcision is the surgical removal of this foreskin. The procedure can be performed on adults or infants.

When did it begin?

We first read of circumcision in the Old Testament when God commanded Abraham to circumcise himself and his children and for the practice to be passed down through his descendants:

Interestingly, other groups also practiced circumcision, including the Egyptians and Moabites, so it was not unheard of. However, only Abraham and his descendants used circumcision to symbolize their covenant with God.

Are we required to practice circumcision today?

This was a question the First Century Church struggled with as the first Gentiles became believers.

“Some men came down from Judea and began teaching the brethren, ‘Unless you are circumcised according to the custom of Moses, you cannot be saved’” (Acts 15:1 NAS).

“Now therefore why do you put God to the test by placing upon the neck of the disciples a yoke which neither our fathers nor we have been able to bear? But we believe that we are saved through the grace of the Lord Jesus, in the same way as they also are” (Acts 15:10-11 NAS).

The idea here is that if we treat circumcision as part of the Law, and we circumcise ourselves in order to adhere to the Law, then we must adhere to the entire Law…something no one can do.

Should we circumcise our sons today?

Although we aren’t required to circumcise our sons, the practice still holds a lot of value (as do so many of the Old Testament Commandments).

Sign of Faith – The removal of the foreskin is a symbol of separation from the world and unto God. We are a people set apart. What greater and more intimate way can a man declare his faith and obedience to God than through circumcision?

Choosing to circumcise your children is also an act of faith. Robby and I discovered this when we chose to circumcise our little boy. We didn’t want to put him through an unnecessary procedure with potential health complications, but we trusted that God would take care of him (and He did). As a mother, this was a much bigger act of faith than I had ever appreciated before.

Dedication – Although it is not required, a new believer may choose to undergo circumcision as a sign of faith and dedication to the Lord. However, most circumcisions today are performed on infants. While the procedure doesn’t secure the child’s salvation—he still has free will—it is a type of dedication unto the Lord. As my son grows up, he’ll have a constant reminder that God loves him and wants him to be counted among His children.

Health Benefits – Not surprising, doctors have determined that there are medical benefits to circumcision, including a reduced chance of urinary tract infections, penile cancer, and sexually transmitted diseases. It’s also not surprising that doctors have confirmed the eighth day (the day God commanded) is the safest to perform the procedure as this is when the body’s blood-clotting substances are at an all-time high. When God first gave the commandment of circumcision to Abraham, He certainly knew what He was doing!

Whether you circumcise your children or not is a matter of personal choice. There are biblical and practical reasons to support it, but there are also risks associated with any medical procedure. Before you decide, research God’s Word and pray about the best course of action for your family.

As believers, we are called apart from the world. This week, I encourage you to “circumcise your heart,” or to submit your heart to the Lord. More important than any outward symbol, this inward submission is a true sign of your relationship with God.

“For in Christ Jesus neither circumcision nor uncircumcision means anything, but faith working through love” (Galatians 5:6 NAS).

He said this verse proves that circumcision is now useless. I disagree.

In the context of this chapter, Paul is speaking to the church at Galatia. There, a number of Jews were essentially telling new Gentile believers that they had to become Jewish before they could become Christian—and a big requirement to being Jewish was to be circumcised. Paul responded to those who were “seeking to be justified by law” that they should not seek the law itself, or the “yoke of slavery,” but instead accept God’s grace that was freely given to them (Galatians 5:4 and 5:1 NAS).

As stated above, circumcision is NOT about salvation—it never was. However, just like the other commandments of the Old Testament, it can still hold value to us today if we seek God’s heart in it and avoid the trap of legalism.

I’d love to hear from you! Please leave your questions or comments below.