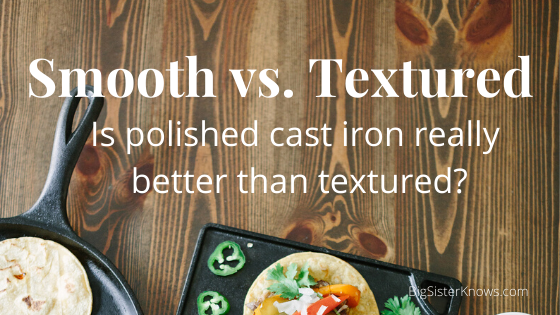 My first cast-iron skillets were family hand-me-downs—big, nondescript pans with smooth interiors. When I ordered a small griddle from Lodge last year, I was surprised to find the cooking surface had more texture. The first time I used the griddle, I was afraid my pancakes would stick, but they flipped cleanly. I figured that the texture was less important than the pan’s seasoning; if that was good, then the pan would be nonstick.

I didn’t realize this was a point of contention, if not confusion, among cast iron users until I read an article a couple weeks ago by a collector. The author talked at length about her opinion that smooth skillets are more nonstick than textured pans. She even referenced methods to polish textured pans to make them smooth. After a quick search online, I found many similar articles, all espousing the benefits of polished skillets. I decided I needed to dig into this smooth vs. textured issue, so I reached out to my contact at Lodge, the oldest cast-iron cookware manufacturer in the U.S. Here’s what I learned.

The Reason for Texture

Cast iron manufacturers can produce pans with smooth or textured interiors. Lodge skillets are textured on purpose. The company states the texture allows the oils to adhere to the skillet’s cooking surface during the foundry seasoning and later, when the user cooks on it and maintains it at home. While Lodge did produce polished skillets for many years, they were discontinued due to poor sales in 1998. Polished skillets were never a major part of the company’s business, representing less than 2% of sales when they were discontinued.

Why do people prefer smooth pans? It seems nostalgia is to blame. Those of us who love cast-iron cookware have our favorites, and those tend to be the pieces our grandparents and parents used the most. If your favorite pan is smooth, it may have been polished by the manufacturer or it could have lost its texture over time due to regular use, especially if metal utensils were used in it. If the pan was ever refurbished to remove rust, that process would also have smoothed out any of its original texture.

While a smooth texture may make the pan a little harder to season, the nonstick coating is reinforced with regular use and proper maintenance. That means the pan you use every day probably cooks just as well today as it did when your grandmother first started using it—if not better.

In the cast-iron community, there is something called the Fried Egg Challenge. It’s simple: if you want to know how well a cast-iron skillet is seasoned, you fry an egg on it. Ideally, the egg should flip easily and slide right off the pan. If the egg sticks anywhere in the pan, you know you need to perform some kind of maintenance, such as a light seasoning.

In the following video, a member of the Wagner and Griswold Society (a group devoted to cast-iron and aluminum cookware) conducted the Fried Egg Challenge on a very rough Griswold skillet. To his surprise, the rough surface didn’t have a negative effect. In fact, he states the textured pan works better than polished skillets. (Interestingly, he seems to believe the rough texture is a result of disuse. Although he refurbished the pan himself, he didn’t go so far as to polish out the texture.)

If you plan to polish your own pan, beware—you could end up removing too much of the cast iron. This would make the pan too thin or uneven, which would negatively affect its cooking ability. Since cast iron is a hard but brittle substance, you could even break the pan. If you’re still bent on polishing your textured pan, contact a member of the Wagner and Griswold Society or someone knowledgeable in your area.

It’s All About the Seasoning

In the end, a well-seasoned pan has more nonstickability (my new term) than a poorly-seasoned pan, regardless of texture. If you’re using your grandmother’s smooth pan, then keep using it and take great care of it. If you buy a new pan, don’t be afraid of the texture or of using metal utensils in it.

Now get out your pan and keep on cookin’ in cast iron! 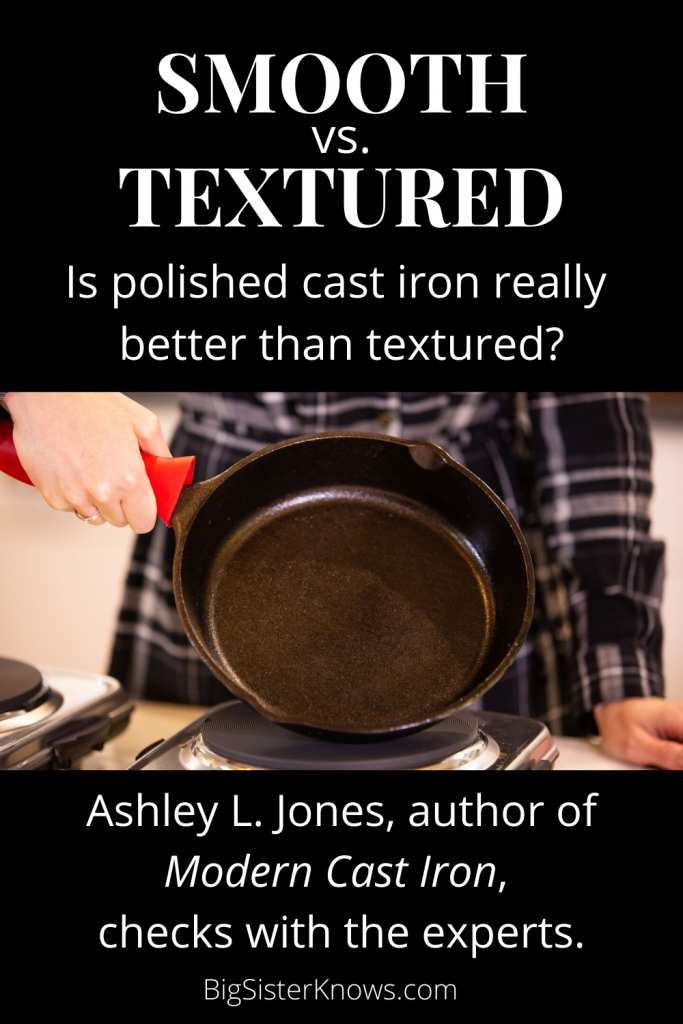 Want to know more about cast-iron cookware and how to care for it? I provide all the details you need in my book, Modern Cast Iron: The Complete Guide to Selecting, Seasoning, Cooking, & More (August 2020). You can also sign up for my monthly newsletter for cast-iron tips, tricks, and recipes.