Yesterday afternoon, I started writing a blog post on anarchy and how it’s incompatible with the Christian worldview. After a couple hours, I gave up and set it aside because I couldn’t get my point across without it sounding like a political piece—and I don’t talk about politics here on BigSisterKnows!

Then I got a text from my church here in Tallahassee, Florida. It was a short video in which our pastor shared the horrible news that our church had been vandalized. Someone had broken into the church at 11:30 am and then proceeded to walk through the halls, pouring accelerant on the ground. Then they lit a match or a lighter or a tiki torch or something because the gas burned—but the church didn’t! The accelerant seared into the carpet but didn’t ignite into flames, leaving a sign for everyone to see this morning—a sign that God had protected our church yet again!

But I’ll be honest: I’m still mad. I’m furious. I’m disgusted and fed up and sick to my stomach with the way people are acting and the direction this country is going in. Our church hasn’t been the only one to be vandalized or burned lately; it’s happening all across this country. Who are these people who dare to touch the house of God? Where is the outrage? What are we doing about it?

For the first time, I can empathize with Lot:

“[God] rescued righteous Lot, oppressed by the sensual conduct of unprincipled men (for by what he saw and heard that righteous man, while living among them, felt his righteous soul tormented day after day by their lawless deeds)…” 2 Peter 2:7-8 NAS.

Due to my continued concerns about COVID-19, I stayed home this morning with Gordon, but Robby went to church to show our support and solidarity with our fellow churchgoers. When he returned, Robby told me what the pastor spoke about today: that the only way to effect positive change is through Jesus Christ, not politics or social reform. Robby said the whole service was focused on Jesus (Halelujah!).

The only way to effect positive change is through Jesus Christ, not politics or social reform. #change #godistheanswer Click To Tweet

I’m still struggling with my anger and frustration, but I agree with the pastor. Our nation started down this road when it abolished reading the Bible in primary schools. Then colleges and universities began recruiting outspoken atheists who taught their rhetoric to young adults. Now a large portion of society is not only atheistic but in full rebellion from God and participating in an open war with the Church and biblical doctrine.

But our enemies are not those who sit on the other end of the political aisle. Nor are they atheists or liberal professors or the police. We have one Enemy, Satan and his dominion.

Over the years, Satan has taken advantage of the lack of Scripture in the schools and of impressionable minds and hearts that were eager to change the world. He has manipulated millions of young pregnant girls into getting abortions and tempted politicians into selling our rights for more votes. And now he is taking advantage of the COVID-19 pandemic to sow fear and anxiety. He is using our own political machinery and social goals against us.

And what is the purpose of all this? What is the Enemy’s goal?

“Be of sober spirit, be on the alert. Your adversary, the devil, prowls around like a roaring lion, seeking someone to devour” (1 Peter 5:8 NAS).

The Enemy is using the issues our country faces to sow disorder, chaos, and anarchy. He is the one behind the scenes instigating violence; he’s the one lurking in the shadows, stoking fear and anxiety. The Enemy wants to destroy everything that is good about this country because everything that is good about us came from our godly heritage—which is why he’s so focused on destroying the Church, through fire if need be. Satan hopes that if things get bad enough, we’ll forget our faith and either embrace the lawlessness or die brokenhearted.

What, then is the Church to do?

“Now flee from youthful lusts and pursue righteousness, faith, love and peace, with those who call on the Lord from a pure heart. But refuse foolish and ignorant speculations, knowing that they produce quarrels. The Lord’s bond-servant must not be quarrelsome, but be kind to all, able to teach, patient when wronged, with gentleness correcting those who are in opposition, if perhaps God may grant them repentance leading to the knowledge of the truth, and they may come to their senses and escape from the snare of the devil, having been held captive by him to do his will” (2 Timothy 2:22-26 NAS).

We alone hold the answers for our country because we know Jesus, the One who specializes in transformation:

“Therefore if anyone is in Christ, he is a new creature; the old things passed away; behold, new things have come” (2 Corinthians 5:17 NAS).

Let us, the Church, pray for our country and our leaders. Let us be ready to share the Gospel in season and out of season. But let’s also focus on getting our own act together—putting away sin and embracing the cross and its call for spiritual discipline and purity. For then, and only then, will we be able to show the world what real transformation looks like—not through lawless anarchy, political change, or even social reform, but through the law of grace and love, through unity and self-sacrifice.

Now wouldn’t that start a revolution?

I’d love to hear your thoughts on this. Join the conversation by leaving a comment below. Thanks!

Pin it For Later 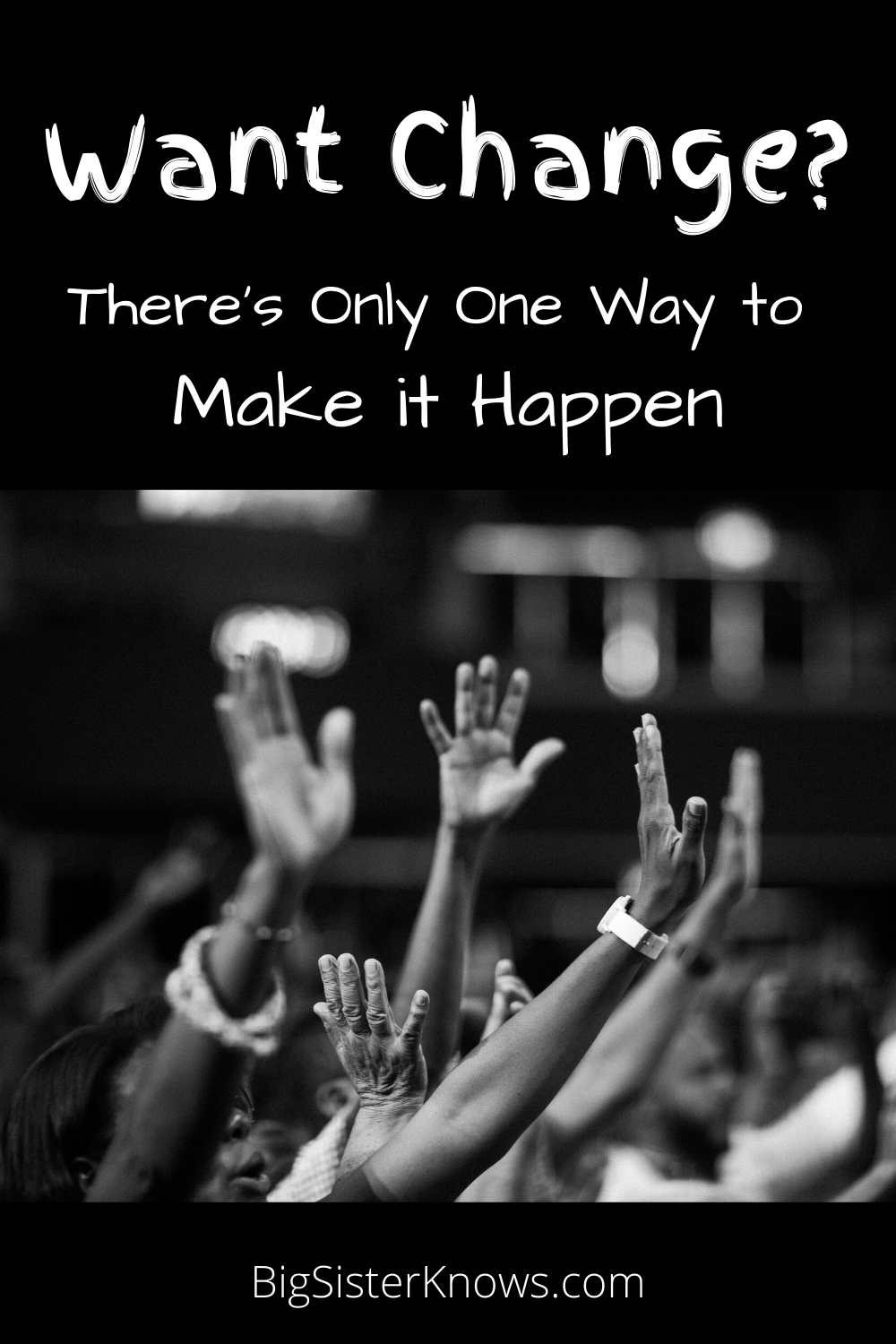