Let me be clear on one thing: sweet little grandmas don’t lie. They can’t. It’s not in their DNA. However, they may have inadvertently spread a couple mistruths about cooking in cast-iron cookware.

Our grandmas were cast iron pros. They grew up cooking in cast-iron pans heated up on cast-iron stoves, and they knew everything there was to know about them. Then, in the 1970s, aluminum and stainless steel entered the marketplace, and the heavy black pans were relegated to Sunday dinners. Since then, technology has changed, as well as the way we cook.

Due to its wholesome appeal and its many advantages in the kitchen, cast iron is now in vogue once more, and a new generation of home cooks are looking for instructions on how to cook and care for their cast-iron cookware—and I’d wager you’re one of them. But before you ask your grandma how to care for your pan, take a look at these three “mistruths” that are still circulating around the kitchen table:

A friend of mine told me how he “helped” his mother wash her favorite cast-iron pan as a child, only to have the soap strip the pan down to the silver! His mother was furious, and I don’t blame her!

Our grandmothers traditionally used lye soap, which was made of animal fats mixed with an alkaline solution of lye (sodium hydroxide). This kind of soap was very effective at cleaning just about anything, but it was very harsh on skin, and it was so base that it could easily strip a cast-iron pan.

Nowadays, we don’t use lye soap. Technically, we don’t even use soap; we use dishwashing detergent, which is very gentle and perfectly acceptable to use on cast iron. Just be careful not to put your pan in the dishwasher, which usually calls for a more abrasive detergent. The longer wash cycle and drying time can also cause the pan to rust overnight.

Grandma said not to wash your cast-iron pan with soap--but she used lye soap. Today, you can use mild dishwashing detergent on your pan with no problems. Just be sure to dry it thoroughly. https://wp.me/p5RmGL-1kU Click To Tweet

Our grandmothers usually wiped or scrubbed their pans clean (and I’m pretty sure our fore-grandmothers used sand to scour their pans on the Oregon Trail). Scrubbing removed baked-on food but retained a layer of oil or fat on the pan, which helped to avoid rust and kept the pan nonstick. “If you wash with water,” they said, “the pan will rust.”

And this is true…to a point. If any moisture is left on a pan, it will begin to rust immediately. That’s just how corrosive iron is. However, this can be easily avoided by thoroughly drying the pan on the stove or in the oven after washing it.

I cook in my cast-iron pan daily, and I don’t want tomorrow’s cobbler to taste like this evening’s Alfredo dish. That’s why I wash my pan with a mild detergent and then dry it on the stove on medium-high heat for a few seconds.

My sister’s grandmother, Ginger, still cooks with her big cast-iron skillets. She usually keeps them strewn across her counter top, often filled with bacon grease so they’re ready for the next meal. Since she cooks in her pans frequently, she doesn’t have to season them often, but if she did, she’d use lard. And only lard.

Our grandmothers used lard because it was tasty and, usually, the only thing available. You can still find lard in the grocery store, and it’s perfectly good for cooking. However, when it comes to seasoning your pan, you may want to avoid it. That’s because lard is an animal fat—made from pork—and it can turn rancid over time. Our grandmothers used their pans every day, often for every meal, so there was no opportunity for the lard to turn bad. If you don’t cook with yours that often, reach for something like olive oil.

If you’re fortunate enough to be able to speak with your grandmother, ask her about her cast-iron pans. Ask her about her favorite cooking memories as a child, how she took care of her pans, and what her favorite dish was. And if she tells you to never use soap and water and to invest in a giant tub of lard, well, smile and agree with her. After all, grandmas never lie. (But they don’t need to know how we do things today.)

Pin it for Later: 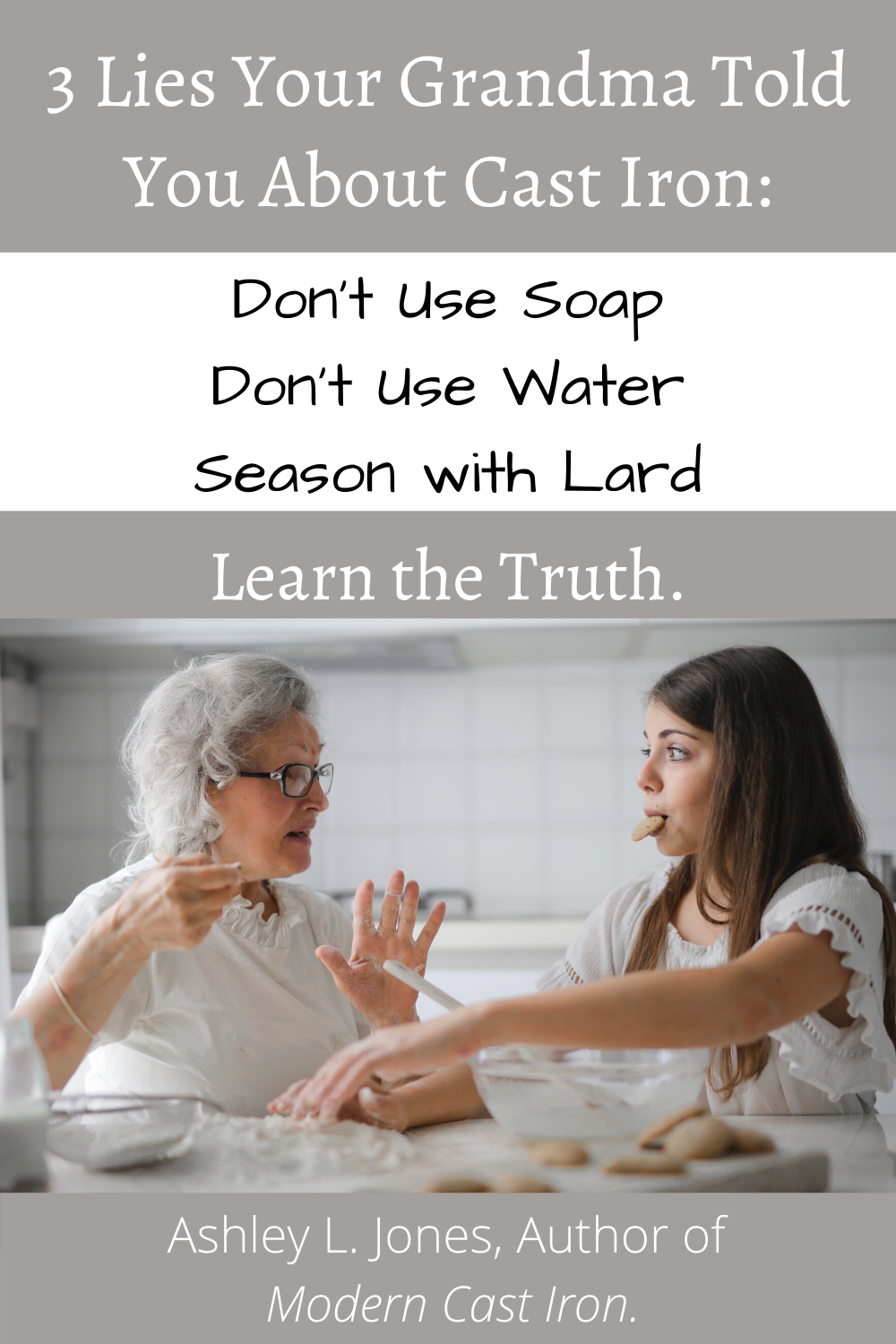 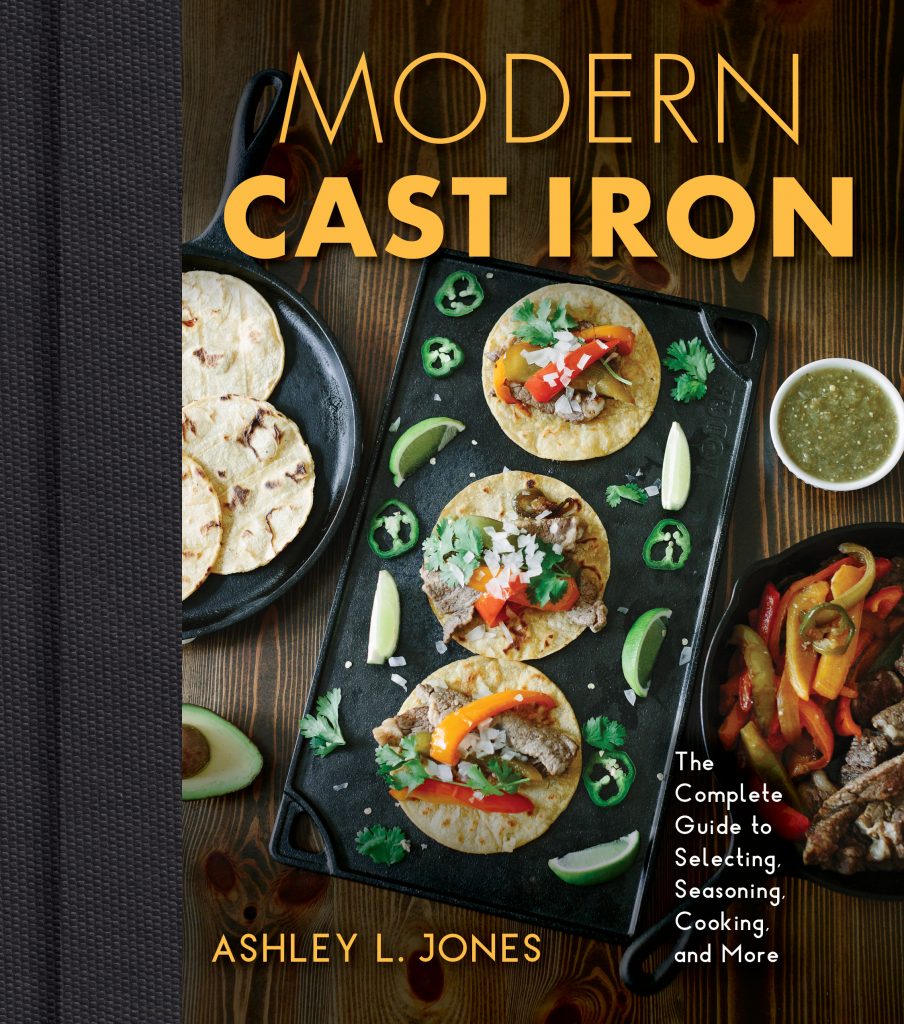