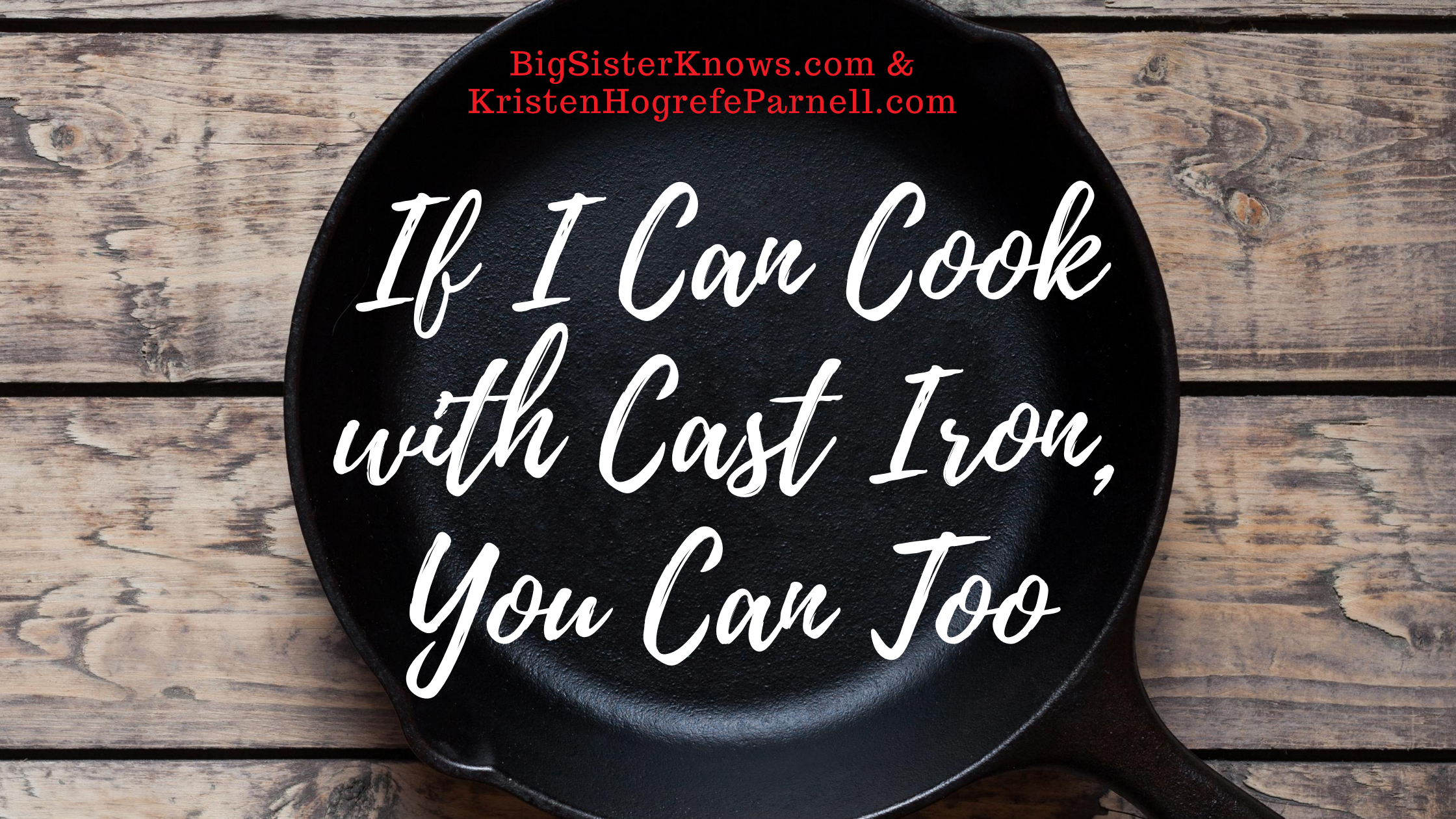 Does cooking with cast iron intimidate you? You’re not alone! I’ve talked to a lot of people about cast-iron cooking, and the words “fear” and “intimidated” come up a lot. That’s because we fear what we don’t know…and because Grandma made it look sooo easy!

Modern Cast Iron is all about replacing that fear with confidence. That’s why I’d like to share a few stories with you that friends have shared with me recently. This first one is by my friend and author Kristen Hogrefe. I’m sure you’ll appreciate her story as much as I do! At the bottom is a special offer, so be sure to check that out! ~ Ashley

Did you or your kids ever watch “The Little Engine that Could” where the train puffed and puffed and told himself, “I think I can, I think I can”? Yes, I did too.

While I’m all for positive vibes, I also believe in giving ourselves and others grace for making mistakes. As an online English teacher, I often tell my students, “It’s okay to make mistakes,” and “Don’t be afraid to fail. Be afraid not to try at all.” The truth is, there have been many days I needed to give myself that same freedom to make mistakes and learn from them, especially when in the kitchen.

Cooking as a Single

When I was single and living on my own, I mastered the art of not starving. I could make a mean salad and felt pretty confident about my grilled egg, ham, and cheese English muffin sandwiches. Also, I firmly believed mac and cheese constituted a complete meal. (Can I get an Amen?)

I was so busy working, serving at my church, or meeting up with friends that food literally took a back burner.

Cooking as a Newly Wed

As I prepared for my wedding, I started to Pinterest in earnest, searching for “easy meals,” which was code for, “How can I keep my husband happy … and alive?” I had a few tried and true menus, like grilled cheese, spaghetti, my friend Ashley’s taco soup recipe, a chicken bacon ranch Crockpot dinner, and something else I can’t remember at the moment. But clearly, I needed to start paying attention to food, because I didn’t want to be that wife.

Good news. We’re a year and a half into our marriage, and James thinks I’m a decent cook. Side note: He is the nicest human ever. I also encourage him to grill as often as he wants.

When my friend Ashley first told me she had been contracted to write a book called Modern Cast Iron, I celebrated with her out loud but inwardly wondered how on earth I could help support her in this endeavor since cooking with cast iron TERRIFIED me.

The first problem: I didn’t own a piece of cast iron.

The second problem: Ashley and her husband are amazing cooks (I’ve seen them in action a few times), and I am not. True, I had managed to recreate her taco soup recipe with smashing success, but that was one recipe. Even girls like me get “lucky” sometimes.

But more important than my pride was my friendship with Ashley. While researching how to cook pork chops on Pinterest, someone recommended a small cast iron grill pan. It was right around my birthday, so I asked for one, and behold, my wish was granted.

First impression: Dang, this thing is heavy. Second impression: Hey, this isn’t so scary. I successfully cooked pork chops and later asparagus in the grill pan. Everyone survived the experience.

And then my friend Ashley did the kindest thing. Perhaps she suspected my cooking insecurities or my need for a nudge in the right direction, because she gifted me with an enamel Dutch Oven. It was for my birthday, anniversary, and housewarming all wrapped in one, and I literally cried when I received it because she was so thoughtful, and it was so beautiful.

But still the nagging thought: Can I actually cook with cast iron?

What can be more terrifying and intimidating than making homemade bread? Okay, yes, a T-Rex, but those are extinct. 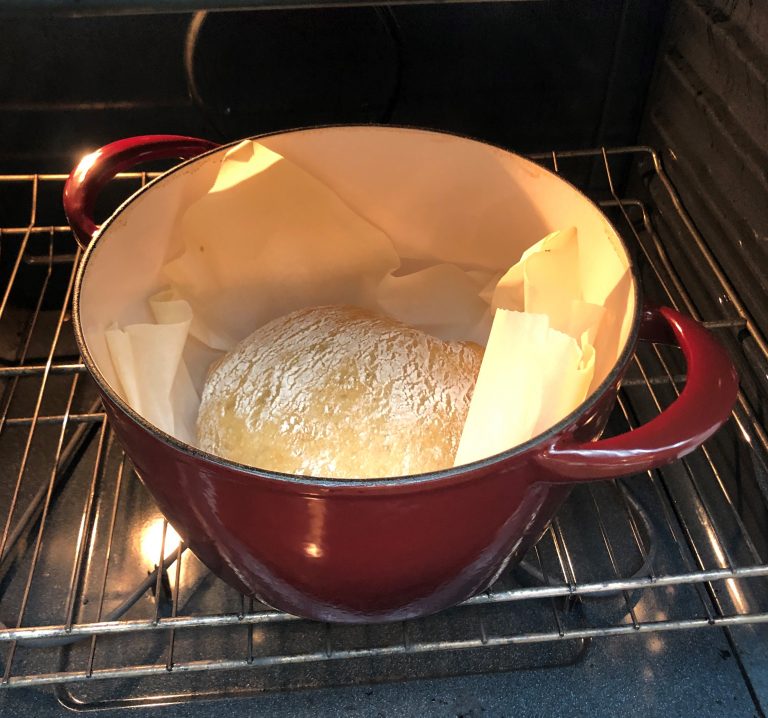 Still, I knew I had to try this beautiful Dutch oven gift or appear ungrateful. So I found a Crusty No Knead Dutch Oven Bread Recipe on Pinterest and followed the directions.

Other than not rising as much as I had hoped, it looked like … bread. It even tasted like bread. Hello, I made homemade bread! And James liked it, which is ultimately what matters.

Choosing to Be Brave

None of us likes feeling like a fish out of water. Instead of focusing on the fear of failure, though, let’s focus on the possibilities. Even seasoned fishermen don’t always get things right.

I love the story in Scripture where Peter, the expert fisherman, worked his nets all night and had nothing to show. Nada.

That feeling must have been way worse than my failed zucchini boat lasagna attempt. But I digress.

When Peter and those with him returned to shore, Jesus asked them a simple question, “Children, have you any food?” When they answered in the negative, Jesus then said, “Cast the net on the right side of the boat, and you will find some” (NKJV John 21:5-6). Now what’s so amazing is that this event took place after Jesus’ resurrection, and the preceding verse made clear that the disciples didn’t know it was Jesus Himself who was talking to them.

But there must have been something undeniably special about Him, because Peter and his friends listened and did exactly what He said. And guess what? They cast their nets and couldn’t even pull them back in because they were overloaded with fish! At this point, Peter recognized Jesus for who He is, and, in typical impulsive Peter fashion, jumped overboard to get to Jesus first.

There’s so much more to this story, and I hope you’ll take the time to dig deeper into it, but here’s my takeaway for today: If God gives us a nudge to do something, whether it be learning to be a better cook or befriending the neighbor next door, let’s do it. Let’s plunge right in like Peter!

There’s the chance we’ll bomb dinner or get a door in the face. But just maybe that recipe will become our new favorite or we’ll discover a best friend living next door. Let’s fear failure less and be brave more. 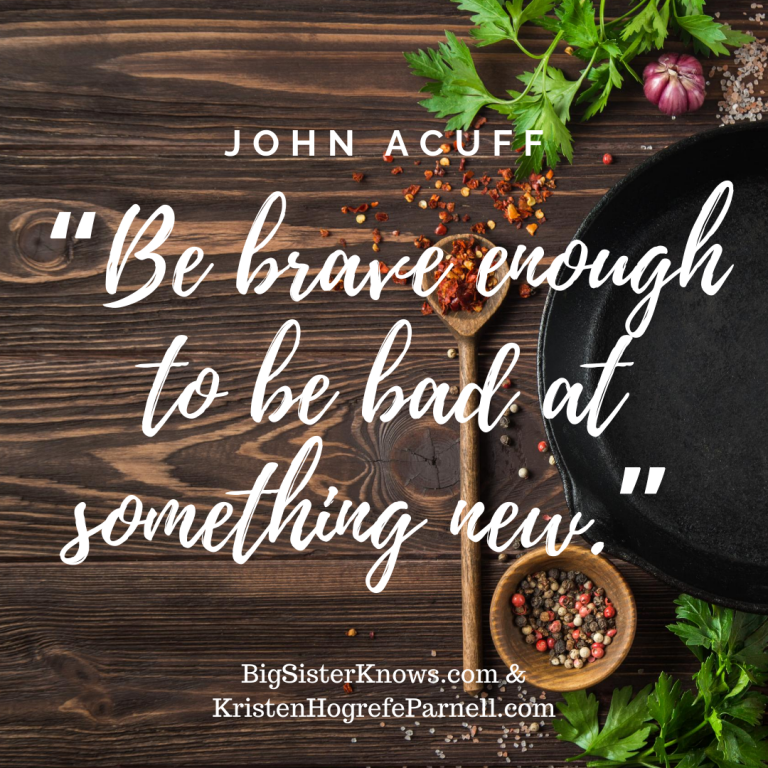 Although I’m nowhere near ready to call myself a cook, there’s a healthy rotation of meal options in our home, and even though cooking for company intimidates me, I’m determined to try more … and be content to order pizza the rest of the time. Kidding not kidding.

If I can cook with cast iron, you can too

Seriously, though, I think I can cook with cast iron. I even bought myself a skillet so I can try Ashley’s Peach Dutch Baby recipe. Maybe it will become our next favorite Saturday breakfast tradition.

Regardless, here’s my dare for you: If I can cook with cast iron, you can too. Be brave and willing to try something you’re not good at. You might just discover a new world of possibilities. 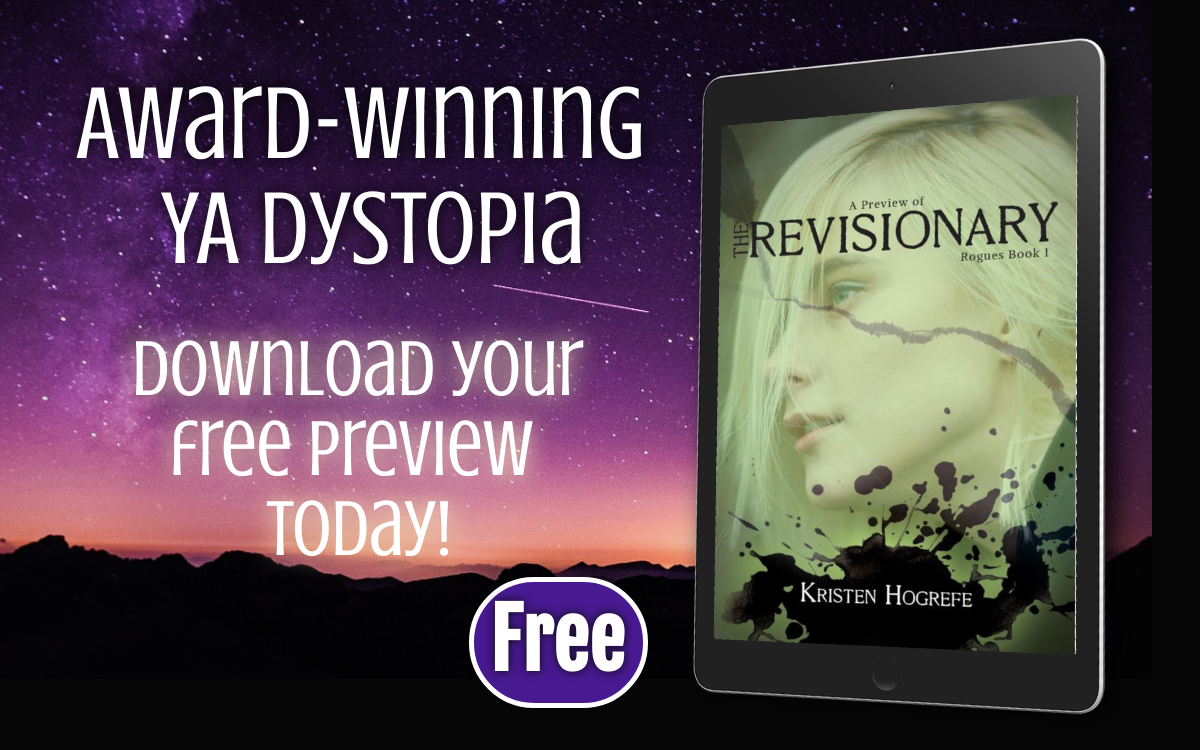 Kristen is offering a free preview of her award-winning dystopian novel, The Revisionary. Click here to get your copy.

Nineteen-year-old Portia Abernathy plans to earn a Dome seat and rewrite the Codex rules to rescue her exiled brother Darius. Her journey demands answers from the past civilization, but uncovering the truth means breaking the rules she set out to rewrite.

When she receives her draft and arrives at the Crystal Globe University for training, she discovers the world is very different outside her cube and that prisoners like Darius aren’t the only ones trapped by the system. 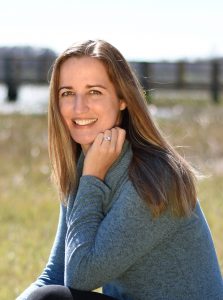 Kristen Hogrefe Parnell is an award-winning author and life-long learner. An educator and mentor at heart, she teaches English online and is an inspirational speaker. Her young adult dystopian novel, The Revisionary, won a Selah for speculative fiction in 2018, and its sequel, The Revolutionary, was a finalist the following year.

Kristen and her husband live in Florida and enjoy sharing their lake home with family and friends. She blogs at KristenHogrefeParnell.com where she challenges readers to find faith in life’s everyday adventures.