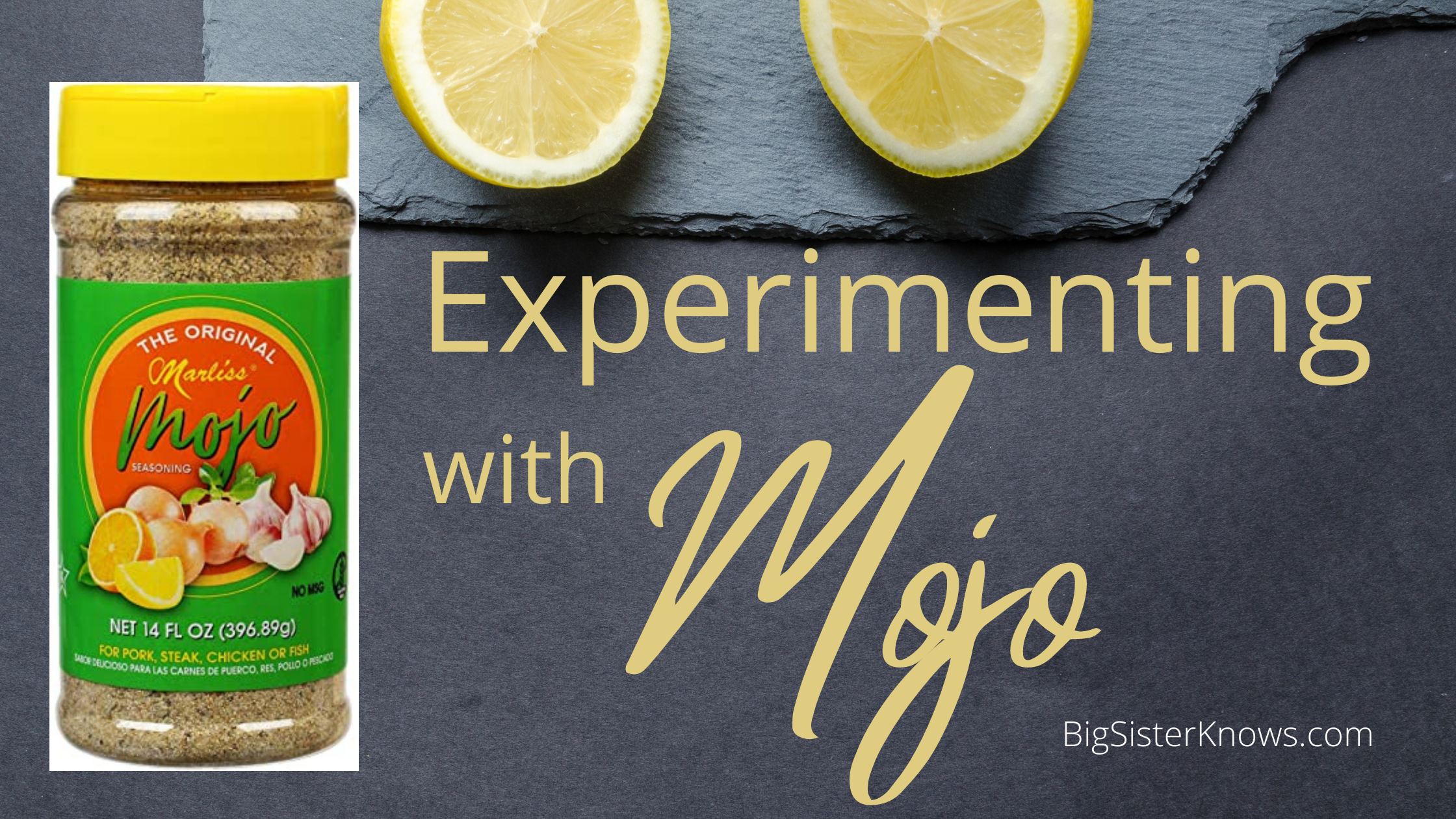 When the folks from Marliss Products asked if I wanted to try their dry Mojo seasoning blend, they had no idea how much I love Cuban cuisine. I may be from the South, but here in Florida, Cuba is “south.” That’s why black beans and rice are as common as collard greens and cornbread.

Still, I wasn’t accustomed to cooking with dry mojo, so I did a little experimenting—and by experimenting, I mean I put it on everything including pork, chicken, fish, and potatoes, and everything turned out great! So here’s what you need to know about mojo seasoning.

According to spiceography.com, mojo (pronounced “MO ho”) seasoning actually originated in the Canary Islands but has been adopted into many cultural cuisines, especially Cuban. Mojo is not a single spice but a blend of spices and flavors that often includes cumin, garlic, black pepper, onion, lime, and orange. In Cuban food, mojo is typically used to season cassava and pork but can be used on a variety of meats and vegetables.

In the 1960s, the Marliss family was the first to bottle liquid mojo seasoning. In the 1990s, they began to produce the dry mojo blend, which is still made in the USA today—and this is the seasoning I’ve been trying out at home. Marliss claims it’s a zesty blend of citrus and “Hispanic preferred spices,” and I can’t say it any better myself. You can use Mojo like any other seasoning blend, as a dry rub for meats and fish, or add olive oil or juice to use it as a marinade.

I first tried the Mojo seasoning as a dry rub on a pork roast. If you’ve read Modern Cast Iron, you may remember the recipe for Beef Pot Roast baked in a Dutch oven. Well, my mother-in-law gave me a huge pork roast, and I wasn’t sure what to do with it, so I baked it like I would a beef pot roast. I put the roast in my biggest Dutch oven, added the Mojo seasoning, and browned the roast on the stove. Then I added large pieces of onion and a 32 oz carton of chicken broth, covered the pot, and baked the roast for about an hour at 350 degrees—and it turned out amazing! (Since I used a heavy cast-iron lid, which kept in all the moisture, the roast actually self-basted. You gotta love the efficiency of cast iron!) The chicken broth in this dish tempered the citrus of the Mojo, allowing me to use the chicken broth as a light gravy for mashed potatoes. It was like Cuban meets Southern, in just the right way.

Breaded and fried in a skillet, cubed pork is a hardy meal on a budget, especially when paired with mashed potatoes. Although this pork is usually flavored with salt and pepper, or maybe a seasoned salt, the Mojo blend was a nice change of pace.

There are a million ways to make chicken, so I figured, “Why not mojo chicken?” I sprinkled some Mojo seasoning on chicken breast cutlets and sautéed them in a cast-iron skillet for a few minutes. Paired with rice and veggies, you just can’t go wrong with this!

Next, I used a couple dashes of Mojo seasoning on a batch of skillet potatoes. I fried fresh-sliced potatoes in a bit of oil and let them cook until they were crispy. The Mojo gave this simple Southern staple a fresh flavor that I can definitely recommend.

I had never thought about using mojo on fish, but the Marliss Products’ Facebook page posted a recipe for salmon that intrigued me. I didn’t have salmon, but we found some frozen haddock at Trader Joe’s the other day, so I gave it a try. I lightly seasoned the fish with the Mojo (one side was sufficient) and then cooked it in a cast-iron skillet in a bit of oil on the stove. After about five minutes, I flipped the fish and let it cook for another five minutes until done.

I didn’t have to add anything else—the Mojo blend gave the fish plenty of flavor! It paired perfectly with a side of yellow rice. I didn’t have any maduros on hand (the perfect sweet companion in Cuban cuisine), but I did have some fresh okra. I baked up a skillet full with a drizzle of olive oil and salt and pepper. I guess I just can’t get away from those traditional Southern foods—and why would I?

If you’re interested in making your own mojo sauce, there are plenty of recipes online, and I’m sure they’re amazing. But if you’re looking for a quick and easy way to spice things up, I definitely recommend the Marliss Mojo seasoning blend. Please note that this spice does NOT contain MSG (thank you!!) but it does have salt and it packs a big flavor punch, so a little bit goes a long way. Look for it in your local grocery store or find a bottle on Amazon. You can also find detailed recipes on Marliss.com.

What about you? Do you like making traditional Cuban cuisine? Or have you experimented with these flavors in other dishes? Leave a comment below. 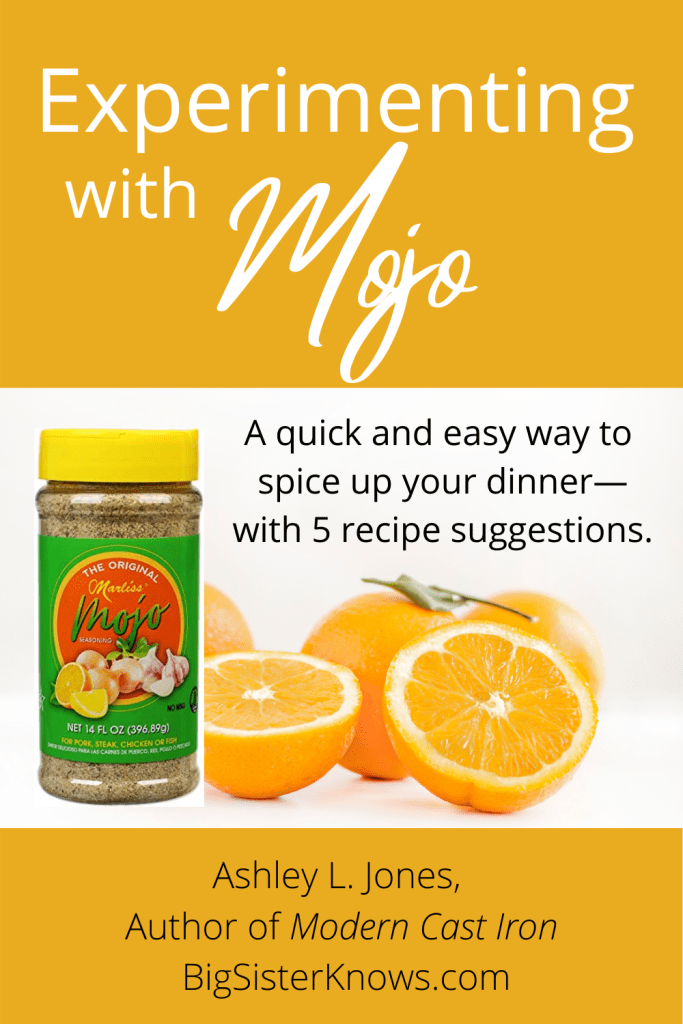 If you’d like more cast-iron recipes, be sure to check out Modern Cast Iron.