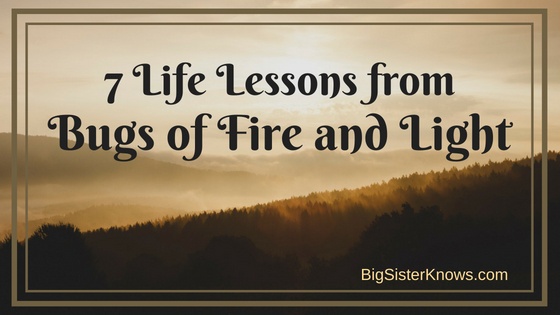 A few years ago, Robby and I had the pleasure of joining our friends Paul and Mary in Gatlinburg, Tennessee. It was during the month of May, and I was thrilled to experience something that had been on my bucket list for years: to see the fireflies. Since I’m from the South, I’m quite familiar with fireflies (aka lightning bugs), but I had read that these amazing insects would gather by the thousands in certain areas in the mountains. Not only would they signal to one another by flashing on and off, but they would actually blink in unison. I could only imagine what a field looked like with thousands of lightning bugs blinking on and off throughout the night.

So when Paul and Mary asked us if we wanted to share their cabin for a few days and join them in watching the lightning bugs, we jumped at the opportunity!

Now, the park in which the fireflies congregate has worked out quite a system. You have to park a couple miles away, take a shuttle to a designated area, and then walk about half a mile to the clearing where the fireflies perform their nightly ritual. The tours were well-organized…and advertised. By the time we tried to purchase our tickets, all of the tours were booked. And since the lightning bugs only perform their dance for a few weeks out of the year, it looked like we were going to miss them entirely.

We were so close and yet so far from those illusive fireflies.

Not to be outdone, though, Paul and Mary asked around. The locals told them about a different, lesser-known spot, on the other side of the mountain where the official tours took place. We just had to drive there and walk up the mountain a bit. No big deal.

I should mention that Paul and Mary were in their 70s, and Paul had hurt his knee earlier that week. I was a bit concerned for them when I heard we had to do some walking, but they assured me they’d be fine.

With restrained excitement, we drove to the park’s back entrance right before sunset. As we pulled into the parking lot, we saw something else on my bucket list: a big black bear. I’d wanted to see one in the wild since I was a kid, and this one was lumbering through the picnic area only a couple hundred yards away. I was thrilled to see him so close, but it reminded me that bears called this mountainside home. And we were about to walk right through that home…in the dark. Sure, we had flashlights, but we couldn’t see the fireflies with our lights on, so we’d be feeling our way up the mountain road.

I was slightly disconcerted, but we were not to be dissuaded. So up we went. Fifteen minutes. Thirty minutes. And still we walked. Paul and Mary did fine, but my knees were starting to feel the strain. And it was dark…really dark…on the side of that mountain. My imagination ran wild as I wondered if every sound was a bear poking its nose through the trees to get a better look at us. Although the locals supposedly knew about this place, no one else was around save for a handful of intrepid climbers. I began to wonder if someone had played a trick on us…or sent us into a trap. And yet we continued to hike—for now it felt like a full-on hike.

To make matters worse, we only saw a few lightning bugs here and there. They were nice, but there was hardly enough to create the blinking-in-unison effect I was looking for. There had been rumors that more fireflies were higher up the mountain, though, so we continued to climb, and I prayed that our adventure wouldn’t end in disappointment.

Finally, at the site of an old abandoned cemetery, we saw what appeared to be lightning bugs, but they behaved differently than the ones I was used to. Instead of flying around in the air, blinking on and off, they stayed “lit” for a long time and hovered just a couple inches above the ground. Their light was a soft glow, slightly green in color. As they circled around the brush and crumbling tomb stones, I imagined so many miniature creatures, going about their evening tasks holding tiny lanterns to illumine the way. Although this wasn’t what I had longed to see, the site was surreal and lovely, and I was glad we had made the trip.

Finally, we started the long trek down the mountain. As we turned a bend, suddenly the sky lit up with hundreds of little white fireworks, each a cluster of dozens of fireflies. They danced above us in the trees. They floated down the side of the mountain, which dropped precipitously into a creek below us, once invisible but now seen in the crackling light of the lightning bugs. They even flew up to us, curious about the visitors who dared the night to join them in their dance.

I looked down at my feet and saw the same greenish lights I had seen in the cemetery. They crawled along the grass and played along a short wooden bridge that connected the path.

Solid green lights below us and brilliant flashes all around us. It was if we were floating in the darkness of night, surrounded by living stars that danced to a song only they could hear. This was more than “blinking-in-unison.” This was better than seeing fireflies from a distance. This was more than we could have hoped for or imagined.

We were speechless as we stood in awe of the magic of it all.

Since then, I’ve thought about researching the types of fireflies to learn more about the ones we saw that night. But it seems that knowledge would only detract from the mystery of the experience. So now, I like to think of the ones with the greenish light as fireflies and the ones that blinked with such enthusiasm as lightning bugs. I feel honored to be able to make such a distinction.

Not only did I have a memorable adventure, and I crossed off an item on my bucket list, but I also learned a lot that night.

Perhaps the ultimate lesson is that God is not afraid to give us more than we can imagine. He’s not a stingy God. Instead, He’s an over-the-top, wild, fully-alive, fun-loving, merriment-making kind of God who created little bugs that flash in the dark. And this is the same God who rejoices over us. Make sure your heart aligns with Him, then pray for your heart’s desire. You’ll be surprised what He can come up with!

“Now to Him who is able to do far more abundantly beyond all that we ask or think, according to the power that works within us, to Him be the glory in the church and in Christ Jesus to all generations forever and ever. Amen” (Ephesians 3:20-21 NAS).