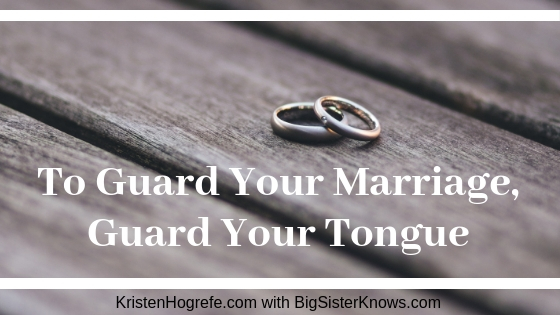 Thanks to Kristen Hogrefe for hosting this week’s blog on her site, KristenHogrefe.com! Be sure to check out her site for more godly encouragement.

As you may know, Kristen just tied the knot with a great guy (woo hoo!). Now, I know she’s overwhelmed with newlywed life, and she’s being bombarded with advice she probably didn’t ask for. Still, as the “big sister,” I feel the need to share the following bit of wisdom I’ve learned over the course of eight years of marital bliss:

Here are a few practical ways to bless your marriage through your speech.

One day your hubby will spill his drink on your beautiful new couch, forget your anniversary, or run over your favorite rose bush with the lawn mower. In that moment, you’ll want to scream at him for being careless, forgetful, lazy, or just plain mean—but don’t do it! Instead, take a breath. If that’s not enough, take a hot shower, put on your comfy jammies, and blast the BeeGees.

Remember that this is your partner in life. You’re on the same team. Then sit him down, make sure you have his attention, and tell him how you feel. Even then, don’t yell or say anything ugly because you’ll regret it later.

“There is one who speaks rashly like the thrusts of a sword, but the tongue of the wise brings healing” (Proverbs 12:18 NAS).

Reality check: your hubby will never cook, clean, or take care of the kids the way you do. He is a man, after all, and men always approach these things a bit different than we do. That doesn’t mean he shouldn’t help around the house or that his quality of work should be less than yours. However, when you see him wipe up a disgusting mess on the floor with your dish towel, take a breath. (There’s a lot of breathing in marriage. Go ahead and practice counting to 10 now.)

Start by thanking your hubby for cleaning up the mess. After all, if he were still living alone, it would probably stay on the floor for a long, long time. Then say something like, “Hey, honey, I like to use those towels for the dishes, so it’s probably best not to use them on the floor. Let’s use paper towels next time, okay?”

If your hubby understands why you do things a certain way, he’ll be more apt to follow your lead. But be careful here! If you correct everything he does, you’ll become overly critical, and he’ll start to tune you out. No one wants to be a nag (or live with one), so pick your battles wisely.

“It is better to live in a corner of a roof than in a house shared with a contentious woman” (Proverbs 21:9 NAS).

As soon as you get married, you learn little things about your new hubby. Some might make you giggle—like his penchant for bubble baths after a rough week. Others may make you cringe—like when his frugality leads him to buy frozen steaks from the dollar store. You may feel the desire to share these little secrets with your mom or best friend, but don’t! Marriage is a sacred union of two, and when you share your hubby’s secrets with others, you let them into your marriage…and nothing good comes from that. Enjoy this time as you get to know your new hubby, and assure him that he can trust you with his heart as well as his little quirks.

“He who goes about as a slanderer reveals secrets, therefore do not associate with a gossip” (Proverbs 20:19 NAS).

While it’s important to avoid negative speech with your hubby, it’s just  as important to fill your conversations with positive speech. Is he worried about work? Tell him that you’re proud of him and that you’re praying for peace and new opportunities. Did he spend all day planting new flowers for you? Tell him how much you appreciate his hard work and how great the yard looks (but avoid mentioning the fact that he ran over the last batch of flowers). This isn’t about platitudes but about finding something good, something sweet to say to the one you love.

“A soothing tongue is a tree of life, but perversion in it crushes the spirit” (Proverbs 15:4 NAS).

Those are four different ways you can guard your tongue—but that’s easier said than done. The apostle James had this to say about it:

“But no one can tame the tongue; it is a restless evil and full of deadly poison” (James 3:8 NAS).

That’s less than encouraging, right? So what is the answer?

“The plans of the heart belong to man, but the answer of the tongue is from the LORD. All the ways of a man are clean in his own sight, but the LORD weighs the motives. Commit your works to the LORD and your plans will be established” (Proverbs 16:1-3 NAS).

The truth is that we can’t control our tongues through our own efforts, but if we submit ourselves—including our speech—to the Lord, He will give us the strength and desire to do so. Here’s a simple prayer you can repeat as often as needed:

“Lord, please guard my marriage by placing a guard over my tongue. Keep me from saying things that would hurt our relationship, and give me the humility to speak in love and kindness. Thank you. In Jesus’ name, Amen.”